Setting up a fleet cluster with Chef and without CoreOS

Moving your software to Docker is like running a long distance. Putting your software inside containers is only the first two kilometers. Then you start to realize that moving your underlaying infrastructure to handle all your new packaged software is a much longer road. I was used to deploy complex systems with Chef to a VM build with Foreman using the Phoenix Principals. Moving the components to containers opened the battle field of Docker orchestration. fleet can handle such things and I believe that CoreOS is the right technology to run Docker hosts. Unfortunately Foreman currently can not handle CoreOS in a sufficient manner so I was forced to make fleet running on CentOS 7. This article describes how I did this.

In the environment I have at hand, Foreman can be used to (re)build a VM. After spinning up a VM, the bootstrap process provisions it automatically using Chef (server or standalone). The Docker host system I’m going to set up runs CentOS 7 (or RHEL 7 if needed - why?). In order to prepare a fleet cluster node I need to write a cookbook that deploys etcd version 0.5.0alpha, fleet version 0.8.3, systemd and of course Docker.

Basically I need to serve two environments: one is a testing cluster running inside a corporate network, the other one is located in a DMZ like network segment. The later needs to handle HTTP proxy settings which is the reason for choosing etcd 0.5. The ETCD_DISCOVERY_PROXY option is worth trying the alpha. 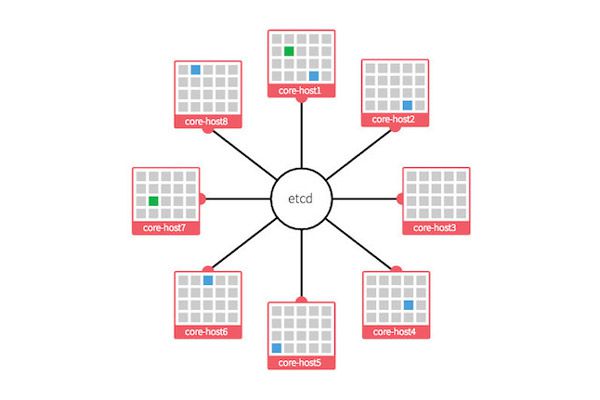 The cookbook I will referring to can be found on Github. It demonstrates the solution based on Vagrant boxes build with Chef kitchen.

etcd can handle cluster setup based on Etcd Discovery Service (discovery.etcd.io or as self-made discovery service) or based on a static cluster setup. I implemented both methods based on Chef roles. Proxy settings can be set based on Chef environments.

Etcd releases can be easily downloaded as binary packages from GitHub. The server will be started using systemd so we need to add a etcd.service unit file which is implemented as template. The unit file will contain all configuration we need for the etcd cluster node. Storing it at /etc/systemd/system/ forces a systemd daemon reload. All together we end up with the following recipe:

The code above demonstrates the main aspects of the etcd recipes. Full recipe can be found here. The unit file for etcd containing the daemons configuration depends on the role set. The discovery role adds additional attributes to default["etcd"]["config"]["environment"] that configures the server to start using the discovery mode. This will create a file like this:

One more thing about the discovery.etcd.io: This is a CoreOS service making it easy to initially setting up a etcd cluster. However it has limitations like the load balancer in front of it which is cutting connections after a while (you get a 504 in case not all nodes appearing in time - check this issue).

Fleet will be deployed using the same procedure as etcd above. There are two more things for fleet:

Creating the core user and distributing ssh keys can be found in the ssh recipe.

This one is easy: just using the docker-cookbook.

To proof the cluster is working a example unit file will be deployed to every node. Once everything is set we can start the container to see the cluster working. Attention: simple example!

Log in to one of them and check the status of the cluster.

You should see no failed services here. Now for the cluster:

We see two machines working as a fleet cluster. Lets have a look at etcd:

Now lets start the test service. fleetctl is using ssh-agent to communicate to the other nodes. We distributed the SSH key earlier so lets use it.

The example service is deployed on the other box. Checking the status of the container can be done with fleetctl. Furthermore it is possible to print the journal of the unit running on a remote node.

Running a more complex piece of software is clearly the next step. Elasticsearch is a pretty good candidate. The fleet metadata capability can be used and there is no need for dynamic scaling (horizontally) in the first place.

Maybe in the near future we can waste all this code and use CoreOS directly. Working as a consultant you always depend on the customers speed. So lets concentrate on things that can be reused. E.g. organizing systemd unit files in a meaningful manner because this is the next challenge if you want to stay with fleet.